Like enset, fonio is not a top producer of carbs or protein. Instead, it is an excellent food security crop. The food from enset waits in the ground 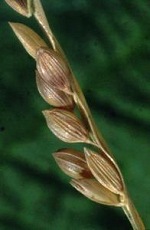 until it is needed. Fonio takes the opposite approach to filling a dire need for food. Fonio is said to be able to reach maturity in as little as 6 weeks. However, a more realistic early season maturity is 70 to 85 days:

“Fonio cropping cycles vary from 70 to 150 days depending on the variety. Varieties with a very short cycle (70 – 85 days) allow the farmers to harvest early and enable them to cover the critical ‘hunger’ season before the major food crops can be harvested.”
[Jean-François Cruz, “Fonio: a small grain with potential”, Leisa Magazine, March 2004, volume 20, no. 1, (LEISA: Low External Input and Sustainable Agriculture), p. 16; PDF]

The harvested grain is 23% husk and 77% whole grain; when processed into refined grain another 9 percentage points is removed, making the white fonio 68% of the yield from the field. [Production quantity reduced by 23% (to 77%) per: CIRAD, Fonio, Processing Diagram]

Yields in the developing world are generally between 600 and 700 kg/ha. [Cruz, “Fonio: a small grain with potential”, Leisa Magazine]

The macronutrient content of fonio is difficult to ascertain, and probably varies significantly from one cultivar to another, but in this analysis, it is taken as: protein 7.1 g, fat 3.0 g, carbohydrate 74.4 g, fiber 7.4 g, per 100 grams of grain. [Protabase Record display, Digitaria exilis (Kippist) Stapf]

Given a yield of 2 t/ha, reduced by 23% to produce whole grain fonio (not whitened fonio), the carb yield per ha-crop is 1,034 kg of carbs/ha-crop. And with a 2.5 month (75 day) growing cycle, the yearly value is 4,953 kg of carbs per ha-year. The protein productivity for this crop is also lower than for other staple foods: 109 kg of protein per ha-crop, and 525 kg of protein per ha-year.

However, as with enset, the value of the crop lies not in its per ha-year macronutrient productivity, but in it use in food security. If a main staple crop such as maize or rice fails, a crop of fonio can be planted and will produce a harvest in the shortest possible time for a staple grain. This grain is also used on a regular basis as an adjunct staple crop. It is planted at the same time as a main crop of grain that takes 4 months to reach maturity. The fonio matures sooner than the main crop, and provides food during the last weeks of the main crop growing season. This time periods of the few weeks before a main staple crop matures is often called the ‘hunger season’ because subsistence farmers can run low on food just prior to the harvest. Fonio covers that possible food gap, thereby helping to prevent hunger.

Posted on November 9, 2012 Comments Off on Food Security Crops: Fonio

This entry was posted in individual crops. Bookmark the permalink.