The Many Causes of the current Global Food Crisis

There is not only one cause of the current food crisis. There are a few major causes and some significant but lesser causes.

Due to Covid-19, worker availability is low. Wages have not been adjusted higher, to account for the difficulty of finding qualified employees. Products with long complex supply chains, stretching across many nations and long distances, are particularly affected. Shipping times have been extended. Availability of product components is low or irregular. And this disruption has affected food as well as other products. This weakness in the supply chain has set the stage for further disruptions due to war.

The Ukraine War and Food Exports

Ukraine is no longer exporting its usual quantities of wheat, sunflower oil, and maize (corn). This is due to the war, which, in some regions of the nation, prevents harvesting due to danger and has forced many farmers to flee. Russia has also stolen some of the grain harvested in unoccupied areas, as that grain had been shipped to ports now controlled by Russia. In occupied regions, Russian soldiers oversee the harvest, and the grain is sent into Russia. But the war generally has caused planting and harvesting to greatly decrease. Then shipments of food into the nation, and within the nation, have been greatly disrupted by war.

Ukraine needs the food that it is growing. The world should not ask Ukraine to export food, until the nation feeds its own people. See my previous post on this topic. The U.N. has had to deliver seed potato kits to 17,740 vulnerable families to help them feed themselves in the months to come, because they do not have wheat. Meanwhile, the world demands that Ukraine export wheat to feed other nations, while its own people do not have enough food.

In 2021, prior to the war, Ukraine was the 5th largest exporter of wheat (by value of the crop in U.S. Dollars).

The listed 15 countries shipped 91.8% of globally exported wheat in 2021 by value. [Data from World’s Top Exports]

Ukraine is not exporting wheat, except unwillingly to Russia. It is questionable whether Ukraine should be exporting wheat when its own population does not have enough wheat.

In March of 2022, Russia banned exports of wheat, meslin (wheat-rye mixture), rye, barley, and maize to nations within the Eurasian Economic Union (EAEU), except Belarus. Later, the exceptions were extended to Armenia, Belarus, Kazakhstan, and Kyrgyzstan. However, Kazakhstan has issued its own restrictions on wheat.

So the war has resulted in sharp decreases in exports from Russia, Ukraine, and Kazakhstan totaling 23.5% of total worldwide wheat exports. Maize and other foods are also similarly affected.

In response to the Russia invasion of Ukraine, the Western nations issued economic sanctions against Russia. These sanctions make it illegal to buy certain goods from Russia. Sanctions also froze Russia’s foreign currency reserves. The reply from Russia has been to refuse to sell food, fertilizer, and to some extent fuel to the West. Russia’s demand that fuel be paid for in Russian rubles, and the West’s general refusal to do so has worsened the fuel crisis. The EU announced that it would reduce purchases of oil from Russia to 30% of usual. Russia has responded by reducing its export of natural gas via pipeline.

This economic war over oil and gas has resulted in higher prices. Natural gas is used to make nitrogen fertilizer. Nitrogen from the air and hydrogen from natural gas is combined to make ammonia, which is then turned into various nitrogen fertilizers, including urea. The high heat and pressure needed in this process (Haber-Bosch process) also comes from natural gas. Higher gas prices and lower availability affect nitrogen fertilizer in the same way. Then higher oil prices result in higher prices for diesel fuel, on which farmers rely for running farm equipment and irrigation equipment. 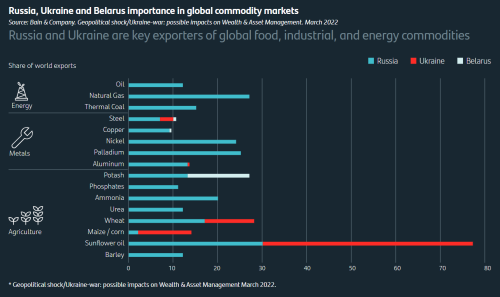 The world cannot make up that loss within less than several years, so agriculture is facing a shortage of fertilizer. But problems with fertilizer and other supplies began with the supply chain disruptions due to Covid-19.

The current crisis in Ukraine “exacerbates a problem that predated the invasion,” says Karsten Temme, CEO of Pivot Bio, a startup that uses microbes to pull nitrogen from the air in farm fields. “Because of all the supply chain shocks we’ve seen over the last couple of years, commodity prices have just been wildly volatile.” As sanctions on Russia grow more severe, and Russia also threatens to stop exporting fertilizer, prices have gone up more. [FastCompany.com]

The issue is not only a decrease in supply of fertilizer, but also higher prices. Farmers are unable to pass on higher costs for fertilizer and diesel by raising the price of their harvested crops. They are paid whatever the going rate for wheat, maize, or other crops may be. Higher commodity prices have not kept pace with higher prices for diesel, fertilizer and other crop inputs. So farmers around the world are facing harvests that will not provide enough money for them to plant the next crop. But if they reduce costs by using less fertilizer, the yields will be lower, also providing less money from the crop.

Certain farmers are more affected by increased diesel prices than others. Those who use diesel for irrigation and use a conventional tilling system require ten times as much diesel as a farmer using a rain-fed no-till system.

Now the U.S. and EU did not sanction Russian fertilizer or food. And recently the U.S. has been trying to negotiate food and fertilizer from Russia. But it is a rather insane foreign policy that issues harsh sanctions against a nation, and then tries to buy essential items from them at the same time.

“The EU and the US have built exemptions into their restrictions on doing business with Russia to allow trade in fertilizer, of which Moscow is a key global supplier. But many shippers, banks and insurers have been staying away from the trade out of fear they could inadvertently fall afoul of the rules.” [Bloomberg]

Not only is Russia unwilling to sell fertilizer and fuel to nations which have issued sanctions against it, but Western companies are afraid to trade with Russia in goods not sanctioned, in case they violate the rules in some way. Then, at the same time, the U.S. and multiple EU nations are providing money and weapons to Ukraine to fight against Russia. And so it is unlikely that Russia will sell food and fertilizer to the West. They are currently preferring to sell to China, India, and other nations not involved in sanctions and not taking sides in the war.

As for oil, U.S. President Biden traveled to Saudi Arabia to negotiate an increase in oil production. It is very unusual for a President to make a trip for such a reason, so the need must be great. But at the same time, the President publicly accused the Crown Prince of the Kingdom of Saudi Arabia of murder. Again, this is an insane method of foreign policy, to ask a favor of someone while publicly accusing them.

As the same time, Dutch farmers are protesting new regulations that require them to reduce nitrogen fertilizer use by as much as 70%. They are stating that this rules cannot be met by many farms, except by stopping agricultural production altogether. The Netherlands has some of the highest farm yields in the world, so their use of fertilizer is very efficient, measures against the amount of food produced. But the government is continuing its policy forcing reductions in nitrogen.

Then there is the agricultural disaster in Sri Lanka, also caused by reckless government regulation of an essential item for growing food: fertilizer. About a year ago, the President of Sri Lanka announced that use of artificial fertilizer and chemicals in agriculture would suddenly be banned. The nation would go organic all at once. Critics say the government was running out of money to buy fertilizer from other nations, as most of it is imported. But whatever the reason, the policy caused an almost immediate collapse of agriculture. Yields for various crops plummeted. One third of acreage was left unplanted. Then planted yields of maize fell by 70%; wheat by 50%; vegetable crops by about 30%. The important export crops of rice and tea also fell precipitously, taking away a major source of funds from overseas. Sri Lanka then ran out of money to buy food or fertilizer. The president admitted his mistake and changed course, but too late. Soon he was forced to flee the nation and resign. But the disaster will not be easy or cheap to fix.

Other nations are experiencing crop failures, often related to dry weather. Farmers in the east of Germany are warning of widespread crop failures due to a lack of rainfall in the region.

During this food crisis, more food than ever is being diverted from the human food supply to make biofuel. Halt use of biofuels to ease food crisis, says green group. See also my past posts at HungerMath on biofuel. The amount of food, especially in the form of edible vegetable oil, corn, and sugarcane used to make biodiesel and fuel-ethanol is astounding. And governments will not stop regulating the increased production of these fuels made from food. The use of soybeans for biofuel is rapidly expanding: “At least 14 new soy processing projects are in various stages of construction, expansion or development, according to recent company announcements. Altogether, about 450 million bushels (mb) of additional soybean demand is expected to occur in the next few years, although the number is likely tens of millions of bushels low….”

Factors in the Food Crisis:

The response of the governments of the world to the impending food crisis has been weak at best and non-existent at worst. At this point, the crisis is unavoidable.

This entry was posted in hunger numbers. Bookmark the permalink.